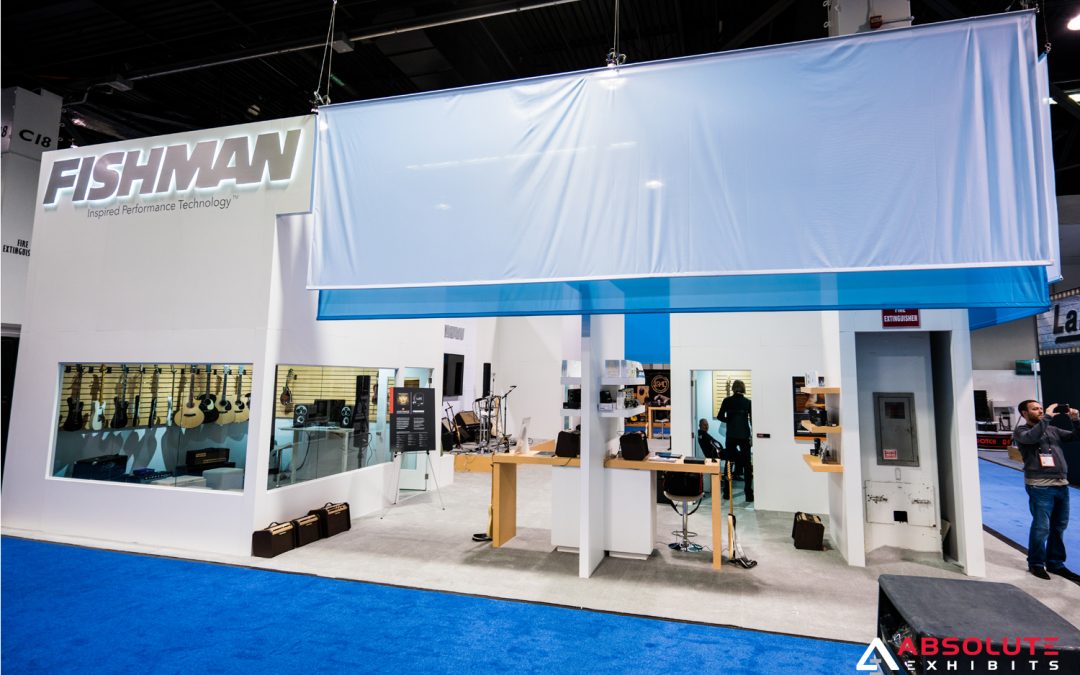 Within most major industries, there is typically one trade show that stands out as the definitive show for that industry. Technology has the Consumer Electronics Show (CES), cars and automobiles have the Specialty Equipment Marketing Association (SEMA), and video game companies gather each year for the Electronic Entertainment Expo (E3).

For the music industry, that exhibition is the National Association of Music Merchants Show or NAMM Show.

Every year over 1,600 exhibitors and 100,000 music industry professionals head to the Anaheim Convention Center to view, share and play with the newest and latest in music production. Top industry brands will use the NAMM Show as a platform to unveil new flagship products.

One of the many distinguished companies exhibiting at the 2017 NAMM Show is our client, Fishman.

Fishman, a leading manufacturer of electric and acoustic guitar pickups, amplifiers, preamps, and other various musical accessories, is a household name in the industry and is no stranger to the NAMM Show.

This year, Fishman has brought an onslaught of products, but the highlights of the show are sure to be their new SA Performance Audio System and Signature Series Fluence Guitar Pickups.

The SA Performance Audio System is a portable speaker system, complete with subwoofer and mixer. This new all-in-one system will be the perfect solution for solo performers looking for a portable sound system they can personalize for a variety of events.

Fishman will also have on display several models of their Signature Series Fluence Guitar Pickups. Revealed last year, these pickups have been modeled after the sound profiles of several notable guitarists, including Stephen Carpenter of Deftones, as well as Adam Dutkiewicz and Joel Stroetzel of Killswitch Engage.

Products won’t be the only thing people talk about at this year’s NAMM Show. The 2,000 square foot Fishman booth demands attention and provides an environment attendees can appreciate.

Absolute Exhibits is proud to have partnered with Fishman to create their custom trade show booth this year.

Play the video above or watch it on YouTube.

Anyone who’s been to the NAMM Show knows that ambient noise levels can get pretty loud so sound leakage was a real concern during the design process. As a result, several precautions were set in place to properly insulate the individual rooms to block outside noise and keep music within the demo rooms.

First, the rooms were spaced out as far apart as possible in an effort to limit the amount of noise and vibration transfer between rooms.

The product demo rooms were positioned at the far corners of the booth so as to not share an adjacent wall while the two meeting rooms were placed side-by-side at the opposite end of the booth.

All four rooms also featured double-layered walls with built-in sound proofing to create an isolated experience for each room.

Day 2 at the NAMM Show and Fishman is already receiving positive remarks from attendees on the look of their booth.

“Seeing Fishman’s booth come together – from concept to show floor – has been an incredibly exciting journey,” stated Michael Pino, Account Executive at Absolute Exhibits. “Their sleek and modern exhibit demands some serious attention on the show floor!”

Attending the 2017 NAMM Show? See the booth for yourself and meet the Fishman team at Booth #4340 in Hall C of the Anaheim Convention Center.